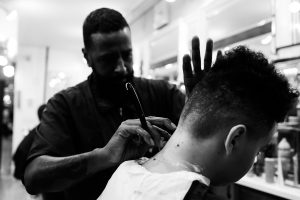 In the video “How Barbershops Can Keep Men Healthy” with Joseph Ravenell, we get an inside look at what exactly goes on in the barbershop and why it is so important for men, specifically men of color. During the video, Mr. Ravenell speaks on the many benefits that the barbershop provides to men, besides the obvious cut and shave. He spokes about the social benefits, as well as the health benefits. During this essay, we will answer a series of questions pertaining to the video and speak on the importance of the barbershop in the lives of men all over the world.

The narrator in the video gives us an inside look of the barbershop that is very unconventional. He puts emphases on the fact that even though it may look like just a regular barbershop to you, it serves a great purpose to him and men of color in the community. Mr. Ravenell described the barbershop as “historically a safe haven for black men” to speak openly without judgement. The barbershop is somewhat territorial because it’s a men’s only club. Mr. Ravenell describes it as “a place that you go to get away from work and sometimes home life”.  Men can come together and speak about identifying interest that they may share. Mr. Ravenell describes the barbershop as “a place of loyalty and trust and one of the few places where you can be yourself”. There was also a sense of familiarity in the barbershop. Mr. Ravenell spoke about how his father who was a local pastor was treated with respect “like a local celebrity” whenever they went into the shop and he himself was treated special as well. From his words, you can tell that the experience stuck with him throughout his life and that he feels that many other black men have experienced the same. The barbershop was best described as the black men’s social club and a safe community for black men (“How Barbershops Can Keep Men Healthy” with Joseph Ravenell).

The barbershop provided the men with a great deal of socialization. Mr. Ravenell stated that within the barbershop, the men spoke about a range of topics such as “politics, sports, world news, national news, neighborhood news, women, and what it was to be a black man in America”. There was also communication regarding health “that were lengthy and deep”. These conversations would include talks about “their doctor’s recommendations to cut salt in their diets, to eat less fried food, or to stop smoking, and reduce stress”. He also spoke about how many of the men in the barbershop spoke about high blood pressure and what would occur if it was mistreated. He stated that “40% of black men have it, and 80% of black men either have high blood pressure or know someone with high blood pressure”. He went on to say that “more black men die from high blood pressure then anything else”. He expressed that high blood pressure is “too often either untreated or undertreated in black men”. This is because black men are less likely to have a primary health doctor. The speaker goes on to state that “the doctors office is associated with fear” (“How Barbershops Can Keep Men Healthy” with Joseph Ravenell).

Mr. Ravenell stress that it is common among men of color to be defensive when it comes to obtaining medical treatment. The barbershop provides mutual support in the sense that that majority of the men in the shop are either suffering from high blood pressure, knows someone suffering from high blood pressure, or knows someone that suffered from high blood pressure. Joseph Ravenell states that many “associate the doctors office as a place of fear, mistrust, disrespect, and unnecessary unpleasantness. He went on to compare the trust that black men have in their barber vs to the amount of trust black men have in their doctors. He then uses the example of his barber that he has been with for “about 8 years and sees them about every two weeks”. He describes his barber as “a leader and a passionate advocate for the wellbeing of his community” (“How Barbershops Can Keep Men Healthy” with Joseph Ravenell).

Mr. Ravenell expressed that “that when you’re in a barbershop you’re in your territory, and among friends that share your history, struggles, and health risks”. The barbershop does not have the same fears and stigmas that the doctor’s office might have. “Because the barbershop is a place of connection, loyalty, and trust, it is easier to speak about high blood pressure”. Mr. Ravenell goes on to say that you too can impower yourself and be like his barber by talking to people in a comfortable environment about their blood pressure. Based on the research that was done in regard to the connection with black men, barbershops, trust, and health, a project was developed entitled “Project Brotherhood, a community clinic developed by Dr. Eric Whittaker, with tailored health care to black men”. One of the things they did was have a “barber on the premises to reward the men that came for needed health care with a free hair cut”. This helped them to meet in the middle and to provide the clients with a familiar ground, letting them know that they cared about how they felt and how they looked. He went on to express that they were “able to partner up with 200 barbershops and other trusted community venues to reach over 7,000 older black men” (“How Barbershops Can Keep Men Healthy” with Joseph Ravenell).

In the video “How Barbershops Can Keep Men Healthy” with Joseph Ravenell, we see the use of a safe space such as the Barbershop and a trust person such as a barber, to help black men feel comfortable with getting screened for high blood pressure. Because black men are more comfortable with their barber then they are with doctors, it is easier to break through the trust barriers with the help of barbers. With the powers vested in the barbers and other community figures, positive changes, activism, and medical improvements and medical assistance was able to be obtained.