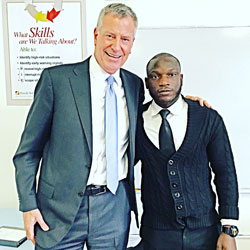 Rickard Jean-Noel is the founder of the Real Word Ministries and The Real Word TV. He alongside Pastor Sander Cameau started the show in his basement. The shows eventually lead to them starting the nonprofit. Rickard has a Bachelor’s degree in Law & Paralegal Studies from CUNY New York City College of Technology.  Rickard worked on a successful political campaign for Mark Levine and worked for Binder & Binder for 3 years, until they filed bankruptcy. Worked later went on to work for BronxWorks HomeBase that was a nonprofit funded by the Department of Homeless Services. There he worked in Homeless Prevention for 2 years. Rickard now works for another nonprofit called CAMBA at a mentally ill chemically addicted homeless shelter. Work is also a youth leader at his church, an ordained deacon and elder, an assistant chaplain for The North Eastern Franco Haitian Youth Federation of Seventh Day Adventist Churches. Rickard is also the executive producer of The Real Word TV. Rickard is also a preacher and motivational speaker, husband, and father. Rickard is currently enrolled in the graduate program at Fordham University, studying his Master in Clinical Social Work. He will apply this degree to assist him with the clinical side of the business.